The new issue of Climax Magazine is out now, featuring a nice article about the Viennese climbing scene and climbing around the Austrian capital.

The editors published a picture of in my own route “Elza”, taken by Claudia Ziegler … They wrote some nice words, too!

The same picture appears as a spread in this month’s issue of the non-climbing magazine Geo Kompakt, which can be compared to National Geographic. The digital edition of the current issue can also be found on their website. Or go straight to page 15-16. 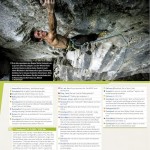 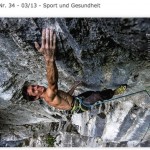