Loads of things happened since my last blog-post “Aufbau in Margalef!” First of all, as soon as we came back from Margalef I felt a lot stronger, therefore I was finally able to send my boulder-project Hocus Pocus! 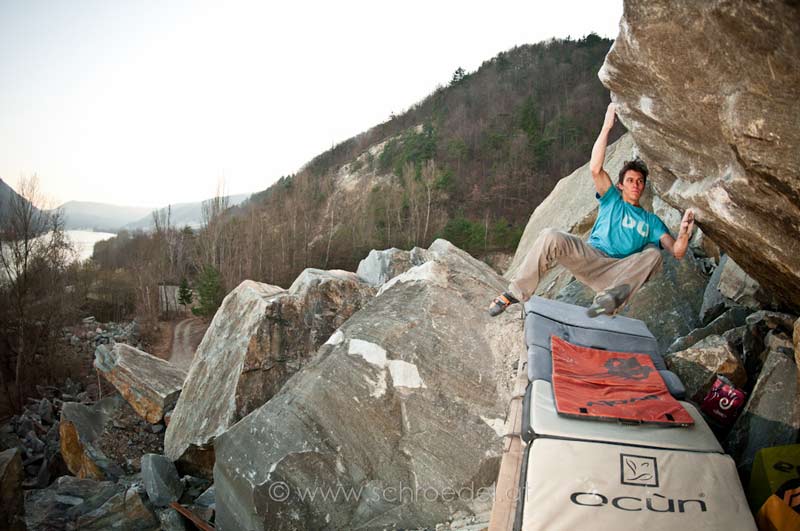 To clean it, figure it out and climb it I needed approximately eight days spread over two months. Found quite some wicked beta. Although people were enthusiastically trying it, it has seen no repeats so far. Some days later I made the second ascent of “Extremely Loud & Incredibly Close”, which is a very good test piece by Bernard Fiedler.

Motivating times, so I got crackin’ with a new and hard project, which a friend of mine had been trying before. Crazy line, first you have to tackle this roof – heel- and toe-hooks, squeezing with your feet, … the whole shebang! After that you have to negotiate your way around a big bulge.

The best beta I’ve found so far is as simple as it is ineffective: compress the shit out of it. The holds however can be picked at will. Just draw some random tick-marks and you’re good to go. 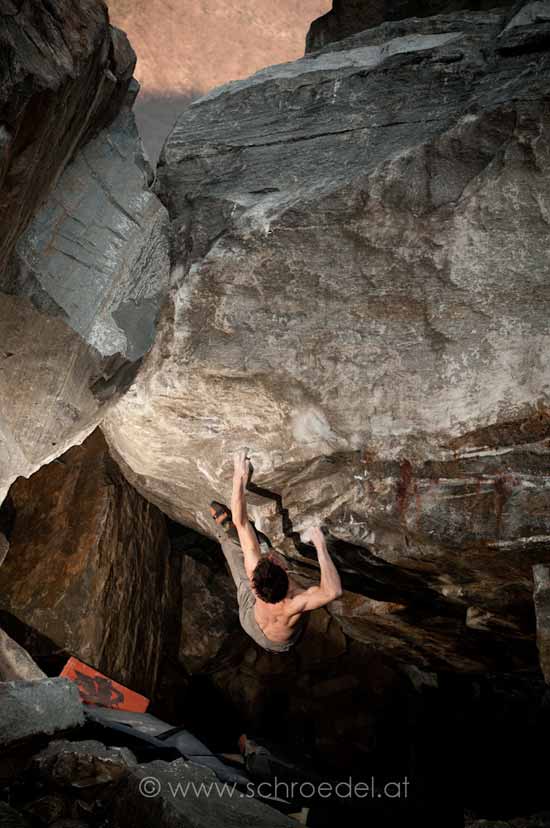 Soon, conditions were out of the window. The heat went up and the friction went down. I realised this when I slid of one of the holds, ripping four fingernails in one go on my left hand. After some inner reflection, whilst watering a nearby bush, I thought it was time to quit with bouldering until next winter. After all, bouldering is just a way for me, not a goal as such. I was aching to climb routes again. Later, ready to store my crash pads away, Jakob suggested that we should start with our boulder film. We did, but our pace is rather slow. Should be online around 2019. Maybe.

After Margalef and all the bouldering my confidence was growing. It was time to get on with my main goal of the year: “Erfolg ist trainierbar” in Adlitzgräben. I tried it a couple of days last year and hadn’t gone in it since then. Now those powerful cruxes went a lot smoother, actually, it was a difference of night and day compared to last year. The power was all there, I just needed to gain some resistance.

Later that month, on the 27th, it was a bit of a weird day. Nina really wanted to climb outdoors; I couldn’t really make up my mind as to what I fancied. We wanted to go to another crag, but in the end we went to Adlitzgräben anyway. I warmed up for two hours, really relaxed, then nearly got my head chopped of by a falcon; wasn’t thinking what so ever about my project. But we were there, so why not work in it, right? So for the first time ever I made it through the crux, starting from the ground. A couple of meters further I fell, because I was so surprised.

Went down, happy as fucking Larry about my progress. I rested for an hour, ate and drank. Then I went up again. Not as fluidly as before but more focused I stuck the crux again. Passing it before really helped a lot in my head. I needed that to believe in it. The second hard section that follows straight after the crux I climbed on the skin of my teeth, barely making it to the good hold. It didn’t go smoothly at all after that. I had to put up quite a fight in my head. All I could think about was that I didn’t want to climb strategically or smart. I just wanted to head on so I could fall; failure is my comfort-zone. My head went crackers! But against all odds, I kept it together.

Drinks were on me!

Last February Thomas and I joked about it in Margalef. If I would ever do my project, Thomas would come over to shoot some pictures. Now that moment was there, and a lot faster than hoped or planned. Who could have thought that? Who would have expected that? So later that week Thomas was flying in, pretty much straight from Lisbon. Packed with a ton of photo-equipment, useful and useless, he brought it all! He also bought me a nice bottle of single malt on the airport.

So climbing my project was a tick off my list. Unfortunately I had added a bunch of other “to-do’s” on it. But the first upcoming thing is our trip to Spain. We’re mainly going to climb in Margalef and Siurana, although I also want to see some other areas eventually. Last week was hectic with a lot of work, so I’m looking forward to getting moving, getting fitter and stronger again after partying so much (loads of birthday-parties). Our friends Ollie en Moniek are already there and other good friends will come as well. We’re just going to enjoy our time, totally carefree now!